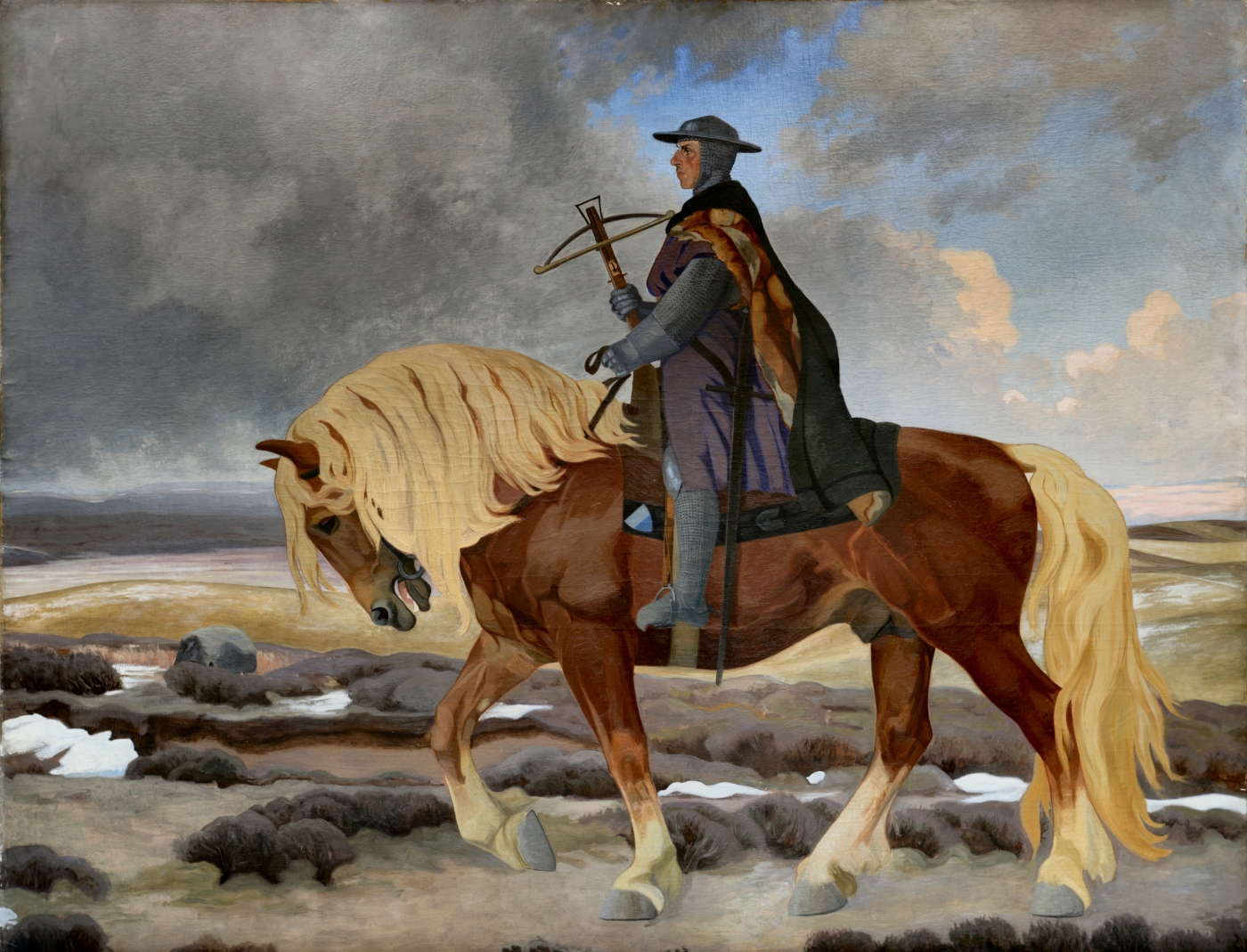 Nightfall. 48 men force themselves into the house of Gerhard III, alternatively known as “the bald count” (with an ‘a’, indeed), and find him inside his bedroom. One of the men steps forward and chops the count’s head clean off. After chopping down Gerhard’s chaplain, a knight, and three soldiers, the sizable gang of assassins bang their drum to announce the count’s death and make their escape. Only one Dane dies during the whole operation.

Leader of this gang was a certain Niels Ebbesen, a member of the Danish lower nobility. His murderous action would have significant consequences. Historians agree that the death of count Gerhard contributed to bringing an end to the so-called ‘king-less period’ in Danish history, during which Denmark had been ruled by a number of German counts; under the reign of Valdemar Atterdag Danish rule was reinstalled west of the Sound.

Niels Ebbesen would live on in memory as a national hero, a symbol for freedom, and a bold resistor of German rule over Denmark. He himself could not bathe in his glory for very long. On 2 November of the same year he died in battle with Holsteinian forces alongside 2,000 of his fellow men. Of course, as things go, this dramatic death only further added to his later appeal for poets and artists alike.

Since the late eighteenth century, the ‘othering’ and often even straight out vilification of Germans formed an important driver behind the Danish nation-building process. Little wonder then that whenever there was a conflict involving Germany, Niels Ebbesen popped up in Danish culture.

First time this happens is in the aftermath of the so-called ‘German Feud’, which was a very heated reaction against German influences in Danish cultural life in the years 1789-1790. However, this first instance of the cultivation of Niels Ebbesen was directly a break with a tradition that had yet to start.

In 1797 a history play premiered in Copenhagen with the title Niels Ebbesen af Nørreris eller Danmarks Befrielse (Niels Ebbesen of Nørreris or Denmark’s Liberation). Author was Levin Christian Sander (1756-1819), who was born in the German-speaking Danish duchy Holstein. Prior to this piece, Sander had exclusively written in German and this play on Ebbesen was his first attempt in the Danish language. Not surprisingly, then, his rendition of Niels Ebbesen’s life story was not particularly anti-German, but was instead heavily infused with the humanistic and cosmopolitan ideals of the Enlightenment. One of the characters even exclaims: “O! Let us not just be Danes! Let us be humans!”

It had clearly been Sander’s objective to mend the rift that had emerged between Danish and German in Danish society – with possibly the most unlikely subject imaginable. Subsequent appropriations of Niels Ebbesen aimed in contrast to make this rift as deep and wide as possible.

In the course of the 1830s and 1840s, tensions rise in the duchies Schleswig and Holstein where an independence movement arises that strives for cession from the Danish realm. This elicits strong reactions in Denmark, especially concerning the Danish-speaking population of northern Schleswig. Things come to a boil when king Frederik VII in 1848 announces a plan to make Schleswig an integral part of the kingdom. The German majority in Schleswig and Holstein take up arms, resulting in the First Schleswig War (1848-51). Denmark manages to come out on top in this conflict, but when a renewed attempt to reintegrate Schleswig under Danish rule leads to war for the second time in 1864, defeat at the hand of the Prussian army is swift and complete: the two duchies are lost in their entirety.

(Admittedly, this is a very brief and simplified summary of events. The whole Schleswig-Holstein question is very, very, very complicated. Famous in this context is a quote from Lord Palmerston:  “Only three people have ever really understood the Schleswig-Holstein business—the Prince Consort, who is dead—a German professor, who has gone mad—and I, who have forgotten all about it.”)

With this context in mind, it might not come as a surprise that Ebbesen makes a return in Danish literature in the 1840s and directly after the defeat of 1864.

A next play on Niels and his deeds is again not the work of a native Danish-speaker, but comes from the pen of an Icelandic pastor working in the Aarhus area with the name Johann Gunlaug Gunlaugsson Briem (1801-80). Despite clearly being a hobby project of a well-meaning amateur, Riddern Niels Ebbesen (The Knight Niels Ebbesen) was apparently being considered important enough to be brutally slaughtered in a 16-page review (o, those were the days!) in the Tidsskrift for litteratur og kritik. Unfortunately, this review is the only source that gives an indication of the content and style of Briem’s text as I was unable to find the play itself in any database. From the review, Briem’s political intentions nonetheless become very obvious. In an admittedly quite ridiculous scene the mortally-wounded bald count (who is thus not beheaded in order to let hem be able to speak for several pages) predicts the future unification between the German-speaking duchies and Denmark, thereby even referring to the situation in Briem’s own time. The message is clear: these parts belong together under a single crown. If even the evil Gerhard says so, it must be true!

The next three literary Ebbesens appear, perhaps not surprisingly, in war years: a trilogy of novels by J.M.G Hollard Nielsen (1847-48), a novel by Edvard Meyer (1864), and a play by Ilia Fibiger (1865). I could only find an online edition of Meyer’s novel. His Niels Ebbesen is a typical example of the popular light reading that was just about to get popular around this time; such often bulky novels were commonly published as newspaper feuilletons or subscription serials. Melodrama is the word: a high level of sentimentality, a lot of action-driven scenes, a black-and-white divide between heroes and villains. Hollywood in book form. Meyer’s novel certainly fits the type. Niels’s death is described in much detail. The following passage at the same time gives a nice indication of the style of the melodramatic historical novel:

“Ha! Count of Holstein!” Niels Ebbesen cried with thundering voice. “Do you feel the blows of Danish swords?”

Again he raised his sword and again he hewed down on his opponent’s helmet.

Then his sword shattered in his hand; the broad blade fell clattering to the ground and only the hilt remained in his hand.

“Ha! Now you will die, my mortal enemy!” sneered Iron Henry, who again sat firm in his saddle and now raised his father’s enormous broadsword, “it’s revenge that will hit you!”

A terrifying gash accompanied these words; the lightening blade hit the knight’s helmet, shattered it and penetrated half into his head.

Niels Ebbesen staggered in his saddle.

“Forward, brothers!” he groaned and he fell down from his horse. “Victory… forward…”

The rest got lost in a deep gargling and Denmark’s saviour breathed out his heroic soul.

Next to offering a thrilling story, the popular historical novel, as a genre, also wanted to teach the reader a thing or two about national history and national pride. In the last couple of pages Meyer zooms out to the present day (again following the template to a tee) and discusses Niels Ebbesen’s great historical importance, stating that he indeed was a great hero who liberated his fatherland from the evil German yoke. And that Germans presently still describe him as a lowly assassin is an absolute chutzpah!

The literary works inspired by Niels Ebbesen’s life do not exactly belong to the Premier League of Danish literary history. The same can be said of the two last works written about him in the nineteenth century: a play by Michael Wallem Brun (1880) and a novel by H.F. Ewald (1886), which both once again thematise the opposition between Danish and German.

A play with greater historical significance was written by the pastor Kaj Munk (1898-1944) in 1942 and was a direct attack on the Nazi occupation of Denmark. Niels Ebbesen was once again evoked as the logical national symbol for Denmark defying Germany. Staging of the play was naturally prohibited by the authorities and Kaj Munk himself was murdered by the Nazis in January 1944 for his role in the Danish resistance. Niels Ebbesen was staged several times directly after the end of World War II.

In general, however, Niels Ebbesen, despite his great symbolic value, did not inspire great works of literature. Exception is perhaps a poem by N.F.S. Grundtvig from 1840, of which the refrain “The Germans are fighting in Denmark” was on every Dane’s lips in the years after the Schleswig Wars. Otherwise the most well-known artistic cultivation of his legacy is likely the painting that is depicted all the way on the top of this article. Agnes Slott/Møller (1862-1937) painted this in 1894 on a monumental scale; a resolute Niels Ebbesen rides an altogether gigantic horse towards a landscape overshadowed by dark clouds, while bringing sunlight and blue skies in his slipstream. Slott-Møller stated her intentions for the painting in her memoirs: “I wanted to paint the picture in order to pay off the debt of gratitude which I felt to this giant Dane for having saved the country at one of its darkest moments.” (Quote taken from Patricia Berman, In Another Light: Danish Painting in the Nineteenth Century (London and New York: Thames & Hudson, 2007), p. 206).