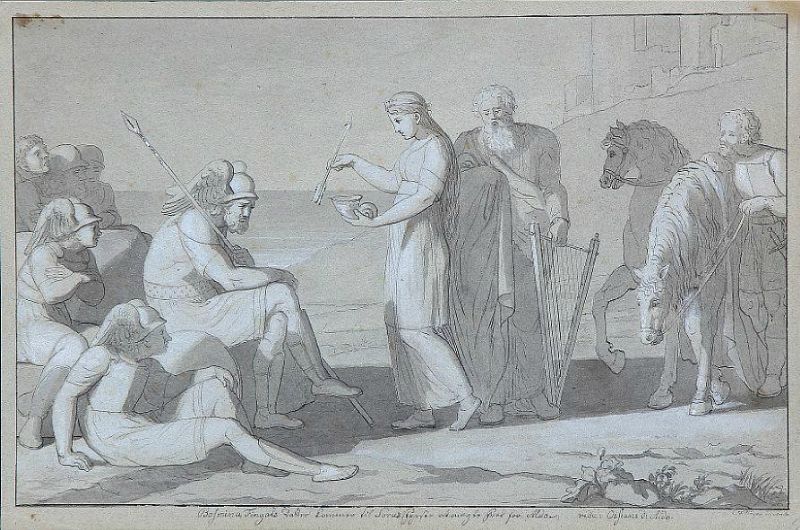 Between the years 1812 and 1821, the Danish art world was entangled in a heated feud on the “usability of Norse mythology in the arts.” Main players in the “Yes! Norse mythology should be used in the arts!” camp were the theologian Jens Møller and the antiquarian Finnur Magnússon; they considered the Norse gods to be excitingly fresh and, also very important, national subjects for painters and sculptors. Their rather aggressive opponents were the brothers Torkel and Gustav Ludvig Baden, who considered Odin and his kin crude and barbaric and completely unworthy of the artist’s attention. I mean, eight-legged horses! A chief god with only one eye! Trolls and giants and dwarfs and cats pulling a chariot! All that was preposterous!

Eventually, the Baden brothers got steadily more isolated, as the Romantic-Nationalist taste for Nordic myth became more and more accepted. One supporter that remained loyal to the end was the history painter C. F. Høyer (1775 – 1855). This Høyer was a tragic figure.

Høyer cherished a strong resentment against Norse mythology. In 1821, Høyer extended a leaflet to the members of the Royal Art Academy in which he really wrecked the ancient culture of the North and instead glorified the achievements of Ancient Greece and Ancient Rome. Among other things, he wrote:

Among the items exhibited in the museum for Nordic antiquities there is not a single one from the days of Nordic mythology reminiscent of the fine arts; it is therefore impossible to imagine the artist thinking something else of our ancestors than that they were barbarians, and not a single artist who has his hands unbound would consequently want to occupy himself with them or their idols.

And this is where the tragedy starts. In order to gain membership of the Royal Art Academy artists had to realize a so-called membership piece. The subject of this membership piece was not open to the artist’s own choice; it was commissioned. The subject that was assigned to Høyer? You guessed it: something from the Norse saga literature… More in particular, the tale of Hagbard and Signe. To make matters even worse, Høyer’s piece was at first declined and had to be adapted before it was deemed worthy of a place on the wall.

The Career That Never Took Off

Høyer had gained access to the Academy’s rank and file, but his years as a member would be tainted by disappointment and constant quarreling. The Academy refused to recommend him for the position of Royal History Painter. This honour was instead bestowed upon two younger painters: C. W. Eckersberg and J. L. Lund. Insult to injury: Lund had not even applied for the position!

In the following years Høyer was twice denied a professorship. This brought him in serious conflict with the Academy. His leaflet on the barbarity of Norse mythology was just one of the publications in which he publicly criticized the institution’s policies. Eventually, his demeanour became so embittered and hostile that the Academy decided to strip him of his membership. His painting of Hagbard and Signe was transferred to a storage room.

In a letter dated 4 May 1829, the miniature painter Christian Hornemann tells the great sculptor Bertel Thorvaldsen about Høyer’s harsh fate:

The unfortunate Høyer asked me – indirectly – to extend his greetings, for he never visits me, he is approaching his grave – only there will this poor man find peace and quiet. You can see how low our compatriot has sunken, and how humility and servility grow in such a situation as he finds himself in. Since he was evicted from his workshop, lost his home, and was expelled from the Academy, no one seeks his services anymore, not even for the most trivial of assignments. The Prince offered him money, but he refused to take it. After all, Høyer is not a criminal, but an honest and respectable man.

A House Full of Paintings

A career that went off to a flying start – Høyer had won the Academy’s Gold Medal in 1799 and 1803 – ended up in a downward spiral after his mentor, Nicolai Abraham Abildgaard, died in 1809. Høyer never reached the level of his teacher and most of his contemporaries were eager to emphasize his shortcomings. Despite the many setbacks that haunted him, Høyer worked relentlessly throughout his life. When he died – 26 years later than Hornemann had predicted – people found his appartment crammed to the roof with finished and unfinished paintings, most of them of a sizeable format.

Unfortunately, I was unable to find a picture of Høyer’s membership piece. The image to this article is therefore closer to the man’s heart: a drawing of Socrates receiving his cup of poison. A perfect example of the civility of Ancient Greece…